Team groupings can be used to ensure that certain volunteers are always scheduled together in a particular ministry, and you may also optionally set up your teams to automatically be scheduled in some simple, repeating patterns. It is important to understand that unlike family groupings, the effect of a team grouping only applies to one particular ministry. The members of a team will not necessarily be kept together when they are scheduled in any ministry except for the ministry of the team. 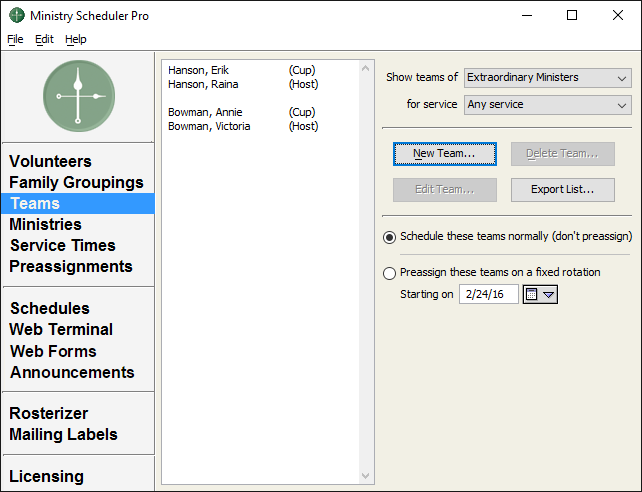 Allows you to choose to view teams from different ministries. If a team has not yet been set up for that ministry, it will not appear in this list.

Allows you to see the teams for a particular service or any service, once those teams are set up.

Click to delete the selected existing team of volunteers. Note: If you edit or delete a team, it will not change the volunteers scheduled on any current schedule and those changes will need to be made manually.

Click to edit the selected existing team of volunteers. Note: If you edit or delete a team, it will not change the volunteers scheduled on any current schedule and those changes will need to be made manually.

Click to generate a .txt file of your teams. You will be able to choose to export all of your teams, or only the ones showing on the current screen. 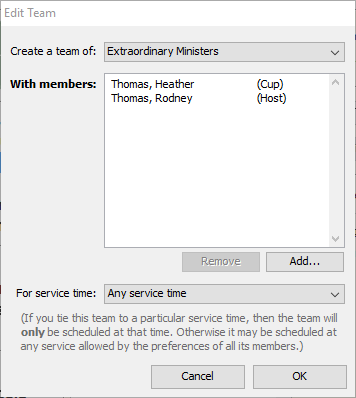 Create a Team of…

In the dialog box that appears, first choose the ministry in which you’d like to create the new team.

You will then be prompted to select the team’s members. The volunteers you select as members of the team will always be scheduled together whenever they are scheduled in the ministry designated for that team. Volunteers can belong to more than one team in a ministry. If you have created subdivisions of the ministry the team is in, you will be able to choose which subdivision each volunteer is scheduled for by clicking on the subdivision next to their name in the Members box to toggle between subdivisions.

Using this option will allow the auto-scheduler to schedule teams together in their given ministry based on availability, but will not rotate through the teams in any given pattern.

It is possible to automatically schedule your teams in simple repeating patterns. This can be done in two ways:

For Any Service Time 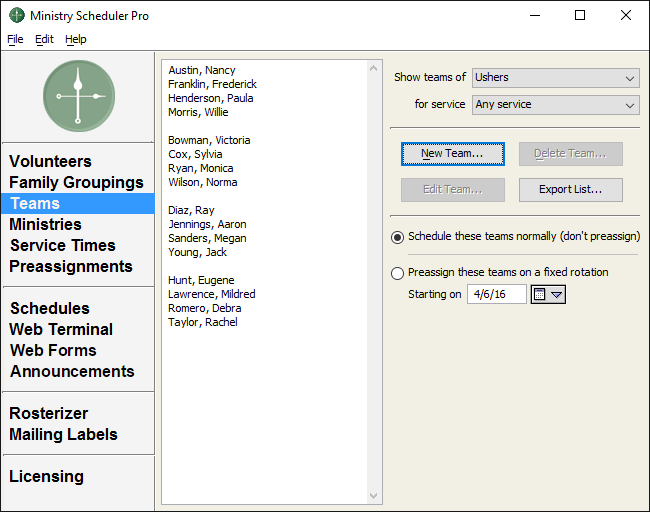 If you have teams that need to rotate across service times, this first type of rotation will allow you to specify that the teams all be preassigned in a rotation, with a specific starting date. For example, to create five different teams of Ushers that rotate amongst all of your four service times, create the 5 Usher teams leaving the “For service time” at “any service time.” Once you have all five teams in place, on the right side of the window you can choose the option that says, “Preassign these teams on a fixed rotating pattern, starting on,” and on that starting date, the first team listed will be placed at the first service, the second team at the second service, etc. Each week the teams will rotate through your services in the order they are listed in the Teams pane. You can drag/drop the teams to adjust the order as needed. 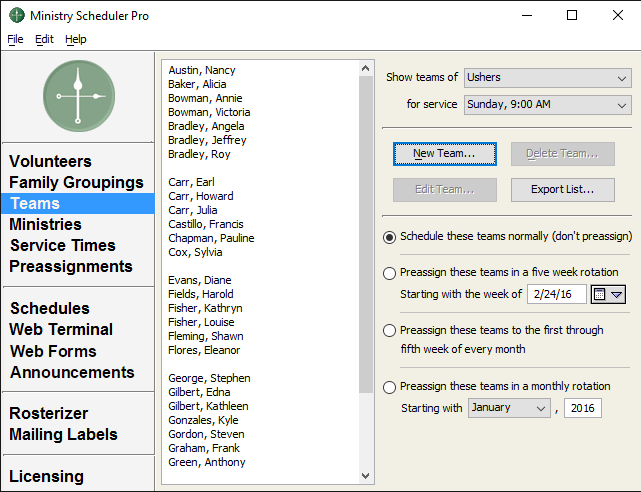 Preassign those teams in an N week rotation

You can also rotate five different Usher teams through one service time, for example the 9:30 AM service time. In this case each team will be scheduled once at the 9:30 AM service time, and then the rotation will start over, cycling through the teams again in the same order. To set up such a pattern, you are required to specify a service time for each of the teams in the rotation. That is, you may not leave the “For service time” setting in the Edit Team dialog at its default value of “any service time.” Once you have created at least two teams for a given service time, the option to “preassign those teams in an N week rotation” will appear next to the list of teams (where N is the duration of the cycle in weeks, and will always be exactly the number of teams you have created for that service time). Select that option and arrange the teams in the list in the order you’d like them to be scheduled by clicking on and dragging them into the correct order. Your teams will then always be preassigned in this rotational pattern.

Another option is to automatically schedule your teams in a pattern so that each team is always scheduled for a certain week of the month. Once you have created two teams for a given service time, this option will appear as well. Turning this option on will always preassign your first team to the first week of the month, your second team to the second week of the month, and so forth, up to potentially your fifth team serving the fifth week of the month. If you have less than five teams, then no teams are preassigned for any weeks in the month that correspond to the missing teams. For example, if you have three teams, they will be assigned to the first three weeks of the month, and any empty positions for the rest of the month will be filled in normally by the automated scheduler with the volunteers or teams that have had the least chance to serve in the past.

Preassign these teams in a monthly rotation

The final option is to assign your teams to every instance of a service for the entire month, rotating through teams on a monthly basis. For example, if you have three teams, team one will be assigned to January, team two will serve all of February, team three will serve in March, and then team one will serve again in April, and so on.

A video tutorial for this topic is also available.